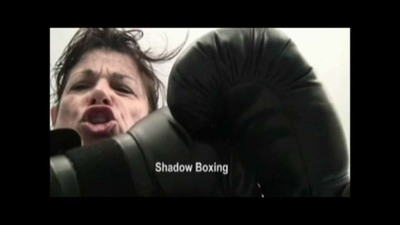 Sweet Secrets: or other people's bodies
Artist Lou Anne Colodny, aka Louie “THE SMASHER” Sams dons the gloves and enters the boxing ring to explore the world of "sweet secrets" - which is a name used in the trade to denote female fisticuffs. She becomes a virtual fighter, placing her likeness on “other people’s bodies” in an attempt to understand and empathize with women who enter the “Squared Circle” of boxing. Colodny’s work has always explored societal  pressures on the individual. This body of work is no different. Female boxing challenges many notions about femininity, power, aggression, shame, and desire. It has always been frowned upon by society.

The doppelganger, Louie “THE SMASHER” Sams (like Colodny) has had very little formal training in boxing. “THE SMASHER” studied training videos on the web and fights on YOU TUBE. For this exhibit, she trained with her coach, Clarence Brussard. Other source materials came from the Woman’s Boxing Archive Network (WBAN) and various fight magazines and publications. Quotes from the noted book on female boxing, WITHOUT APOLOGY, written by Leah Hager Cohen reverberate  through the space from the video portraying the training techniques used by “THE SMASHER”. Not unlike a Cindy Sherman or a George Plimpton, Colodny exposes us to the foreign world of woman’s  boxing via her art. 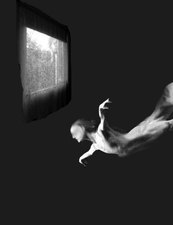 mindful series
The images in this series are compilations of photographs obtained form varying situations and locales. They are enigmatic and blue the lines of reality and fiction. Light is an important element as it seems to emanate from the solitary window creating a glowing sensation rising from the figures in each frame. The images are printed on a backlit material (duratran) and mounted on plexi. By suspending the images in front of a light or placing them in a light-box creates an illusion that there is actual light incorporated into the piece and creates an eerie stage like feeling. The images seen sparse and surrealistic, placing the viewer in a voyeuristic position.

The windows are from a grotto in New Mexico and the figures are imaginary or from the artists’ series of mirrored images. These pieces can be suspended in air or exhibited in light boxes. 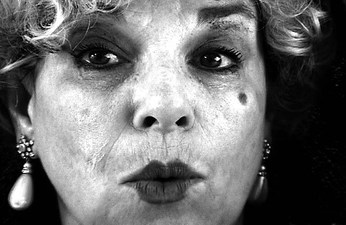 The New Deal or it is not what it seems
In this age of “the truth is not the truth” ...what are we to believe?
The images in this show, while seeming to depict a woman expressing
a heart-felt political message - in reality they do NOT.  They were actually extracted from a infomercial video dealing with  a faux beauty product “saturation: a face-lift in a jar" .First conceived by the artist in 2006, it was  originally  filmed in color and featured the artist as an 80 year old retired dancer from the Follies extolling  the praises of the product. It was humorous and frivolous.


Now, taken out of  context and converted to black and white,
the artist is transformed into  a female making  vehement statements-about what and why -we do not know.We  sense her passion for the subject matter...no matter what it is or it ‘s truthfullness  or importance. All we know is the subject matter is real to her...  TODAY.     2018 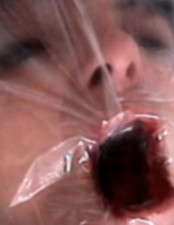 breath/video stills
Created to accompany the video, "breath" , 2002, these images can also stand alone in an exhibition. The video deals with the dehumanization of (wo)man and the physical and emotional entrapment inherent in society today. 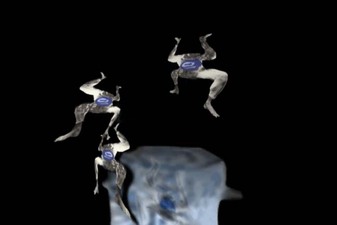 the colony video stills
The video stills in this series come from the video "the colony", They are 6 x 9 inches, printed on archival matte paper
and framed.

"the colony" is an animation /video that has never been realized. It developed as a commentary on cloning and unrest in the world. The blues (who are strangely like headless humans) happily occupy their world until they are attacked by another colony. A war ensues with a final peace accord being struck. The two colonies find understanding and integrate themselves into a new "civilized" society. 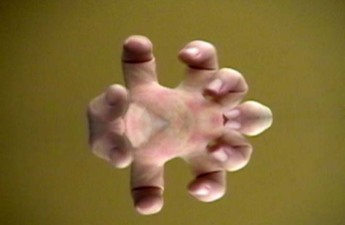 miscellaneous video stills
These images are stills from videos in my portfolio. They have been printed and used as stand alone pieces.
Loading...